Yay!
We can sleep in
I don't need to pack or think about lunches at 745am
Now I just need to figure out how to keep everyone (including me) on track and happy til camp starts the week of the 30th.  Wish me luck, I'll keep you posted
at 12:07 AM No comments:

Girls on the Run 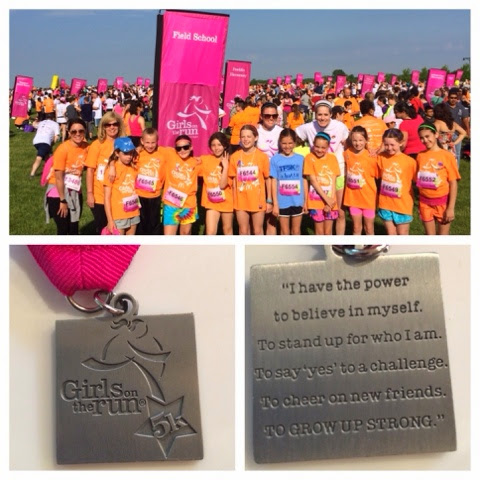 This is the 3rd 5k my daughter has done and I signed up to be her running buddy.  It was a pretty warm morning despite an early start.  Since I had set the pace for our first race, I told her this time I would go at her pace.  The first mile of the course was a pretty tight down and back and after that the course opened up.  I could tell my daughter was getting a bit annoyed at how crowded it was and she passed a lot of people (looking back to make sure I was still with her).
She started off at a pretty fast pace despite the crowd - about 8:45, but by early in the second mile she needed a walk break.  She told me that she was hungry - we had breakfast about 3 hours before the race started.  Not much to do about it except get to the finish.  She ran most of the course with a couple of walk breaks and finished in 35:11 (unofficial as this was not a chip timed race).
We got her medals and goodies and then headed back to our meeting spot to wait for the rest of the group.  One girl and her Mom were already there, the rest came later.  It was a pretty hot day and supposedly some people actually got sick from the heat - luckily no one in our group.
Once everyone had finished and cooled down, we got pictures of the girls and their coaches and headed back for the bus ride home.
Overall she was happy with her time, but learned the importance of fueling properly before a race.
at 10:58 AM No comments:

Since I've been obsessively following Lia ladies on Facebook, I found out that their annual conference set for next week was cancelled this week.  Apparently no specific reason was given. A bit worrisome.
Yesterday I had a long phone chat with a former advisor about her experience.  She had also heard about the cancelation and had no more info, but offered to fill me in if she learned anything from friends who are active advisors. She understood my trepidation about joining a company that cancels an event that big at the last minute.  It is a family owned company so it's possible something happened within the family?  In the meantime they are busy promoting a new product line to be unveiled in August.
Anyway, she told me that like me she had done it for the jewelry discount and some extra money.  She went to a couple of conferences which she said were fun and helpful.  She did most of her business as online parties and occasional fundraisers (giving 10% of her sales to the charity).   She asked if I had an upline in mind and I told her about the opportunity call I had done with a woman in Ohio.  The fact that she does her team meetings as phone/video conferences works out well.
She was actually the perfect person for me to talk to because she really was pretty laid back about her business and said she never felt any pressure to recruit or do more home parties.  Her upline seemed to understand this was the way she wanted to run her business and that was fine.  She only stopped as she also had a full time job and while the Lia Sophia job was good for part time she never wanted to make it a full time thing.  She never earned any of the trips but had plenty of friends who did and raved about them. She encouraged me to go for it once the new line comes out.  She even told me that she would host a party if I decided to do it and said she still had some forms and supplies that she'd be happy to pass on to me.
She's going to be at a dinner that the women's group we both belong to is holding later this month, so I'll get to talk to her more about it then.  Part of the reason I'm going is to the event is to get to network.
at 10:57 AM No comments: