This is a race I've been wanting to do since I found out about it a couple of years ago.  I'm not a football fan, but I'm enough of a sports fan to appreciate getting access to the inner sanctums of the professional sports world.  I mean crossing the finish line at the 50 yard line is pretty cool.  Doing it in Soldier Field (obviously so named to honor those who have served their country on Memorial Day is even better

The last couple of years I hadn't trained enough to do 10 miles this early in the season, but this year I was determined to do it, so while my family slept in on Saturday, I drove down to Soldier Field.  I've driven there a few times and for some reason this time asked Siri for directions, rather than just going the way I probably could have done on my own no problem.  Mistake #1.  She led me the wrong way - opposite side of the train tracks, so I ended up parking at McCormick Place and running over to the start.  Found my corral a few minutes before the race, so had no time for a pit stop before the start.  Mistake #2.

Since I had had to take a few days off due to my sore knee after falling when the dog bit me, my plan was to run the race with 9/2 intervals adjustingfor water stations, and hopefully shave a little time off my previous 10 miler in the fall. 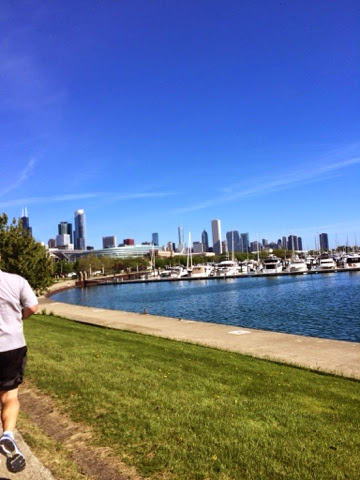 It was pretty congested for mile 1 and we ran under McCormick which I never like, but there aren't a lot of other options around there.  After that the course opened up a bit, and even though I felt great took my first walk break, and was passed by a lot of people.  Stopped in the port a potties at the first water station and after that everything went smoothly.  The course does get a little tight along the lake front which made doing intervals a little tough.  You really need to watch your back before slowing down, but you can't beat the view as you return to the city. 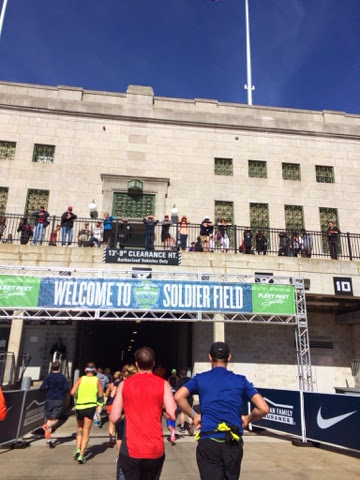 When we got to Soldier Field I noticed a family of 4 running in front of me (Mom, Dad and two kids probably about 9-10 years old).  I was not about to be beaten by a 9 year old so I got ahead of them a little before heading in to the stadium.  I tried to video the final 1/2 mile or so, but failed.  We entered into the players parking lot and then came out one of the tunnels to the field, with the finish line on the 50. 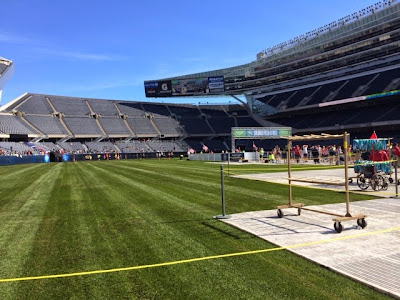 Servicemen and women were on hand (most in uniform) to hand out the medals and water.  They don't let you linger too long on the field as there isn't enough room for everyone but you get a few minutes to soak it in before they shoo you out.  As you leave the stadium they handed out goodie bags - water, banana, clif bar, fruit snacks and pretzels.  The bag is actually pretty cute and a good size for bringing kid snacks to after school stuff. 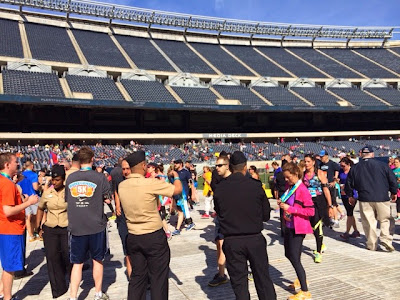 I headed over to the post race tailgate, got my 312, stretched out and headed home.  All in all a good day.  Final time 1:40:44.  Only 20 seconds faster than my previous 10miler but I blame the pit stop for that.  Obviously the intervals worked.  I was able to run stronger/longer and never bonked, still had energy to burn at the finish.  I'll continue with that for my next long runs.
at 9:52 PM