This past weekend we joined my women's group at Arlington Park for Family Days.  Most Sundays through the summer, they have a section of the picnic area set up with stuff for kids.  Pony rides (REALLY long line), petting zoo, bounce house, jugglers, face painting, etc.  There's a little under 30 minutes between each post time, so enough time to wander around in between.  The kids liked feeding the animals at the petting zoo (sheep, goats, llama, donkey) but skipped most of the other attractions.

We got there a bit before the first post time, so took some time to study the day's races while we ate the lunch we had brought with us.  We placed  few bets on each race.  The lowest is a $2 bet, and we each picked a horse for each race, then my husband added a couple of daily doubles and trifectas to make it more interesting.  All in all he and I each picked one winning horse (I picked Sancerre in the first - yes, because it's a kind of wine), he picked Guava Girl in the second cause he liked the sound of the name.  None of the combo bets worked out for us.  Little Hugger wanted 3 Cat Rules and Cat Bells in the 3rd and 4th races (because she loves cats).  The both came in second so no luck on those.  Still the kids had fun.  We watched the horses get saddled up and warmed up in the paddock. 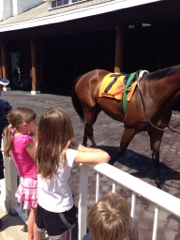 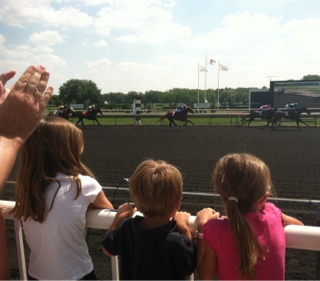 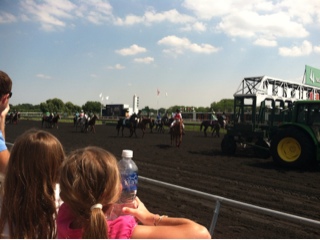 We had to leave before the really big races because Little Reader had a birthday party to go to.  We had fun despite ending the day down (no big surprise given that we picked our horses based on names and not much else).  If we go again, I would probably arrive later in time for the bigger races, but the kids didn't know the difference.