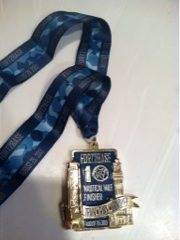 I signed up for this race for two reasons 1) it was the perfect distance in my training for my half and 2) I would finally earn a medal.  So far none of the races I've run have handed out finishers medals.  Tshirts are great and all but I wanted some bling.  It's a really nice medal too with a decent weight.

I'm glad I did it.  It was a great race.  There are two distances 3.5 miles or 11.5 miles.  The 3.5 is around the Great Lakes Naval Station.  The 11.5 is the true Fort to Base.  It starts at Fort Sheridan and finishes at Great Lakes Naval Station.  I did the 11.5 and got up before dawn to drive the (according to my GPS) 26.2 miles ;) to the parking area.  There were shuttle buses from there to take the runners to the start.  I got to the parking a little before 6am (last shuttle was to leave at 615).  There was only one portapotty at the lot, (which caused a few complaints) but I figured there would be more at the start so got on the bus.  There were about 15 portapottys and just under 1000 runners.  There were lines but nothing crazy. 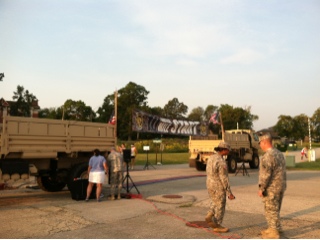 The starting line was a banner between two army trucks.  There were pacers for this race so I lined up near the one running my pace, but didn't end up running with them.  Overall, it was a nice but tight course.  The first two miles wind through the residential areas of Fort Sheridan so the usual two lane road.  Miles 3-8.5 are on mostly on the bike path which makes it a little tight but is actual great if you're in a group with your same pace.  People were good about staying to the right and passing on the left.  Also most of the bike path was shaded which was nice. There are a few parts where you come off the bike path to run through train station parking lots.

Water stations were run by servicemen and women as well as volunteers.  I think having the service members there was a nice touch. 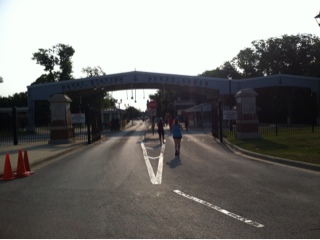 Just before mile marker 9 you run through the gates to the base - which for me meant trying to summon the strength for Heroes Hill.  There's a downhill section and then a road that runs along the water on the backside of the base.  At the end of the back side is the Hill.  It's not long, but it is steep.  I made it up 75% before I had to walk.  I think if I hadn't had a cold I would have made it.  I walked a bit but when I saw the banner and the photographer at the top of the hill, I started running again, and did my best to smile. There was a Navy guy at the bottom of the hill spraying people with water if they wanted and a few others cheering us on and giving high-fives.  After leveling off I did need to walk a bit more but managed to run the final straightaway where my husband and kids were cheering me on. 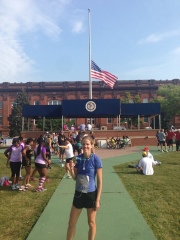 My goal was to finish under two hours - official time 1:56:32.  Next year I will run the whole thing, and I will conquer Heroes Hill.

I saw some online complaints that there weren't enough servicepeople cheering us on, I disagree.  Water stations were manned by Army, Navy and Marines as well as other volunteers.  Once we got on base Navy people were everywhere, giving high-fives, misting us with water, and cheering us on on Heroes Hill.

I also thought it was cool that they announced everyone's name as they cross the finish line.  Not sure how they managed that but another nice touch. 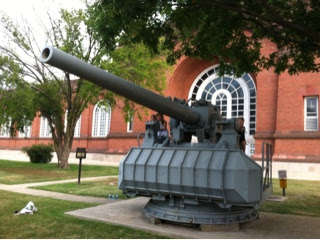 After collecting my medal and other goodies we walked around the main area of the base a bit.  The kids had fun climbing on the deck guns and seeing the one of the old fighter jets. 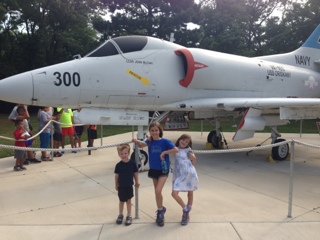 If you look closely at the jet you'll see that the pilot was LCDR John McCain.  The plaque doesn't mention that but when we looked up the USS Oriskany that is the aircraft carrier he served on.

It was a fun day and I look forward to running this race again next year.