So, a while ago I had "the talk" with my Little Reader. As dinner was winding down, we somehow got on the topic of periods. I don't know how but I let Little Hugger and Little Man leave to get ready for bed and then asked my husband if he'd rather skip this too. Less than a second passed before he cleared his dishes.

We have a "how babies are made book" but it's in French. My parents were living in Switzerland when I was expecting Little Hugger and my Mom saw this book and thought it might help explain everything to Little Reader who was about 2 at the time. It's a board book with picture that are detailed enough for the toddlers but since it's in French I made up the words 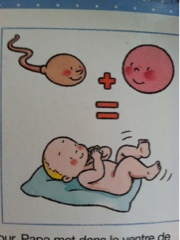 Tonight being asked by an almost 9 year old about periods I figured I'd go back to the book as it has cartoon drawings of the uterus which made it easier to explain. I had told her the basics over the years but I figured this was as good a time as any to give her more info.

Once we were done talking she asked to look at the book some more so I left her room to tuck Little Hugger in. About a minute later Little Reader comes in with the book open to this picture. She said she knew one was supposed to be the sperm and the other the egg, but wasn't sure which was which.  I told her and then Little Hugger wanted to see the picture too.  So Little Reader says, "Did you know that's how babies are made?  The man has the sperm the woman has the egg, and when they meet they make a baby. But don't ask me how they get together cause it's REALLY disgusting, and you don't want to know"