When we started planning our trip to California we picked Momterey as one of our stops mostly because we wanted to drive down Big Sur to get to LA.  We weren't really sure what we were going to do there aside from the aquarium.  Them I found out that we were going to be there during prime whale watching season.  Done.

Our original plan was to see the aquarium the day we arrived and go whale watching the next day.  But the weather forecast was working against us, so after playing beat the clock to get out of Sequoia in time, we switched the reservation and arrived at the dock just as they were starting to board.

It took about an hour to get out to the area where the whales are. The water was pretty choppy and Little Hugger felt a little nauseous but thankfully never got sick.

We saw a bunch if humpback whales.  They would spout and shortly after we'd see the arch of their back and then their fluke.  None of them ever breached but it was still cool to see them that close. 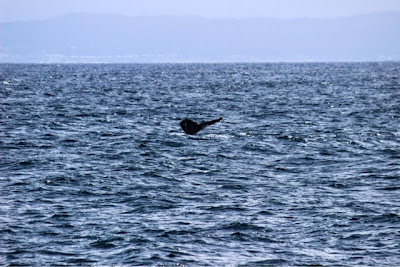 We stayed out in the deep water for almost an hour and then headed back to the dock.  It was pretty chilly on the way back so we stayed inside the boat.
At this point we were all hungry so we found a restaurant in Fisherman's wharf for an early dinner.  Then we headed to the Monterey Plaza Hotel to checkin.  The kids loved the hotel.  We had two connecting rooms that opened to a shared patio.  It was nice to have lots of space after our cramped cabin quarters.

A local on the boat had told us about a great beach for watching the sunset so we drove over there.  The kids had fun collecting seashells (as always) but unfortunately Little Hugger dropped her camera in a puddle in the rocks.  We managed to salvage it, thankfully and she didn't lose any of her pictures. 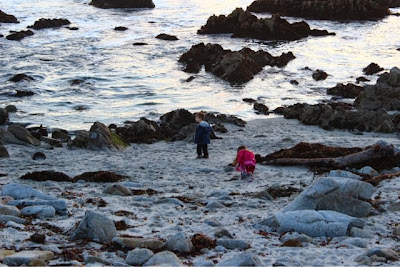 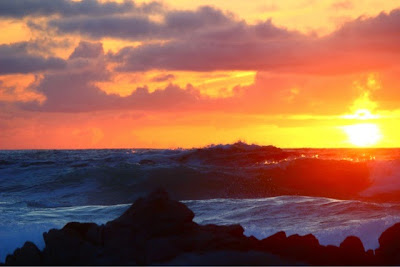 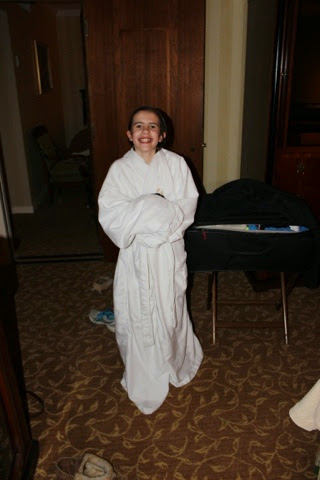 We also realized we need to travel more with our kids.  They were amazed by all the little things - the free toiletries in the bathroom, the robes, the free newspaper, and especially the phone in the bathroom. 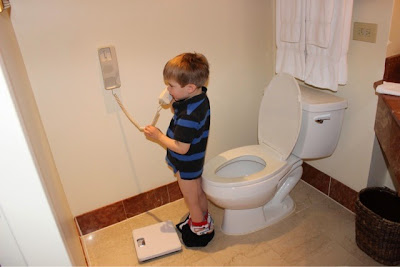 Once it got dark we headed back towards Cannery Row and stopped at a frozen yogurt place before heading back to the hotel.

The next morning I got up early to go for a run.  It was a little cool but I found a nice path along the water - paved at the very beginning and then gravely for the rest.  It felt great to run especially with the views 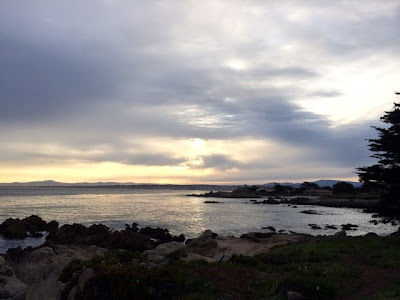 Got to say good morning to the locals :) 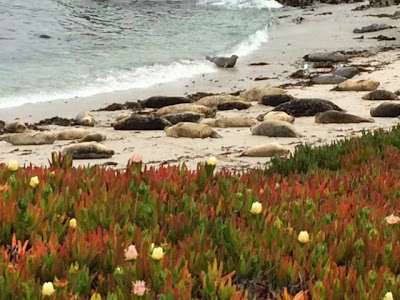 And saw some pretty flowers along the way 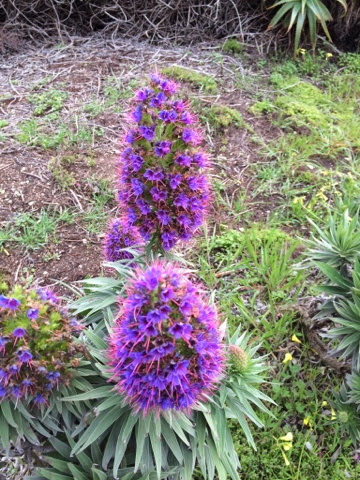 After breakfast at the hotel we headed to the Aquarium.  We have a great aquarium here in Chicago, so I usually don't visit them in other cities but it was going to be a rainy day and I had heard good things about this one.  It did not disappoint.  We ended up spending most of the day there aside from leaving briefly for lunch.

There was a really cool jellyfish exhibit and they had a really interesting presentation about great white sharks.  Apparently they have had a few (one at a time) in captivity over the years and are the only aquarium to have done that.  They only keep them for a few months and when they notice them getting unhappy they tag them and release them back in to the wild.  Little Man was very curious how they know a shark is unhappy so we went and asked - mostly they start acting differently bumping against the sides of the tank and in some cases start looking at their tank mates as food.  Fish are friends not food ;)

It was pouring down when we left the aquarium so we headed back to the hotel for dinner.  We had to eat in the hotel bar as the restaurant was all booked up but the food was the same as the regular restaurant and we had a great waitress so it worked out well.

After dinner we packed up so we could get an early start in the morning.  This was going to be our longest driving day - along Big Sur down to LA about 350 miles.