Sequoia was the first stop in our California adventure.  We flew into Fresno (on a prop plane from SFO which Little Man thought was really cool) and drove about two hours to the forest.  I probably should have checked the directions a little better as we ended up coming in the opposite end of the forest (two hours) from where we were staying.  I hadn't realized just how big this forest was.

The ranger assured us that we would be fine without chains for our tires (despite the fact that CA law requires you have them in your car through the end of March).  We took our time driving up to our cabin stopping a few times along the way.  We stayed in the Grant Grove cabins which are near the Grant tree but not completely out in the wilderness like my husband had remembered from his childhood.  Those cabins no longer exist.

We had originally booked two cabins but were told at checkin we could get a rollaway bed and have all of us in one cabin.  It was a little tight, but we weren't planning on spending much time in the cabin anyway.

The next morning we had breakfast and headed out to explore the forest.  We started with the Grant Tree.  The second tallest in the forest at 264 feet tall (and estimated to about 1600 years old).  There was still snow on some parts of the trail so we were all glad we had brought our snow boots. 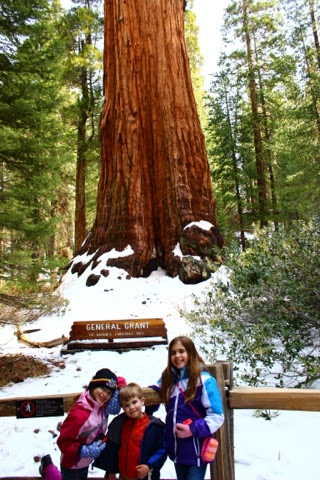 There was a cool tree near there that had fallen down and you could walk through it.  Kids thought that was really fun and went through it a few times. 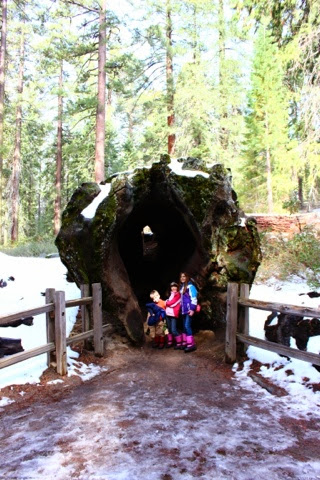 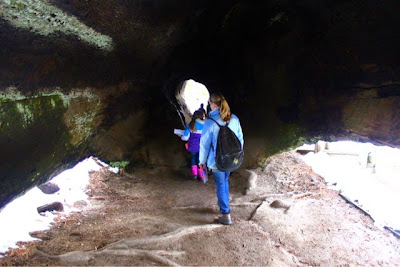 Our next stop was the General Sherman - the tallest tree in this forest.  The funny thing was that on the way to it there's a sign that says "There it is" and there's a really tall tree to one side and then a clearing and another really big tree past it.  Lots of people assumed the closer tree was the General Sherman and took a bunch of pictures of it, only to follow the trail and realize that they had taken pictures of the wrong tree. 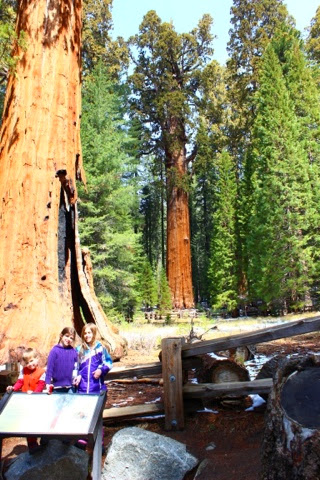 This is the real General Sherman - 274.9 feet tall and estimated to be at least 2300 years old 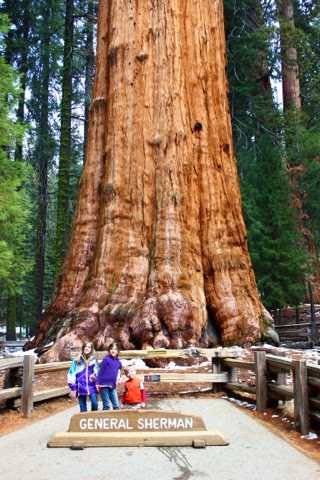 There are tons of "smaller" but by no means small trees in the area which are not fenced off and you can get up to and touch or hug ;) 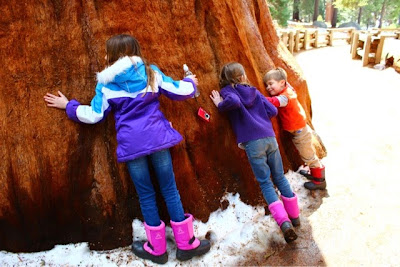 After a quick picnic lunch we set off on a hike to Moro Rock.  It was about 1 1/2 mile away but the kids were willing.  We took a trail through the woods one way, and walked on a paved road on the way back.  Along the trail there were a few spots where trees had fallen and they had to cut through the tree to continue the trail. 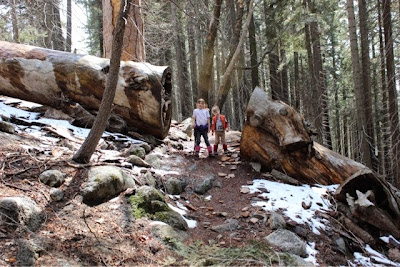 Once we got to Moro Rock there were about 400 stairs to the top.  I hate stairs, especially step or awkward stairs but I wasn't going to chicken out. 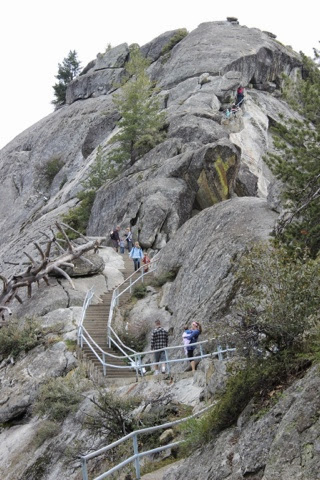 The view from the top was amazing although I have to admit I didn't like getting too close to the rail.  There was one crazy couple who had brought their dog up which seemed insane to me, but they all made it down just fine. 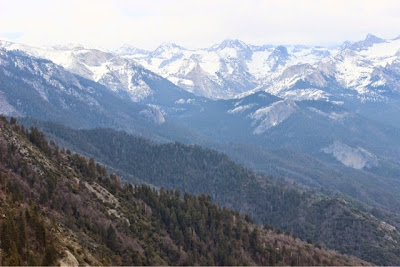 At first I was a little disappointed that everyone else wanted to take the road back but we got to see the only wildlife we saw the whole trip so it was worth it. 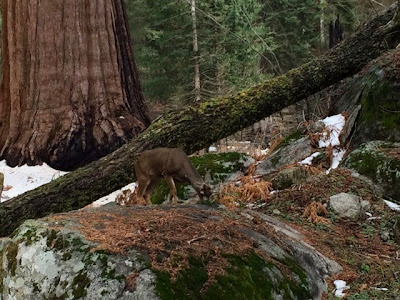 The amazing thing of the whole place though is even though the General Sherman and General Grant trees are the tallest and well protected you can walk close to many of the others and of course end up feeling very small.  We all really enjoyed Sequoia and look forward to exploring more National Parks in the future. 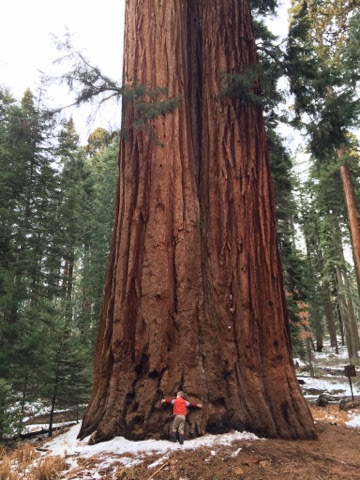 We were planning an early departure the next morning and my husband decided to pack our snow boots in the car to save time in the morning.  The next morning we woke up to this... 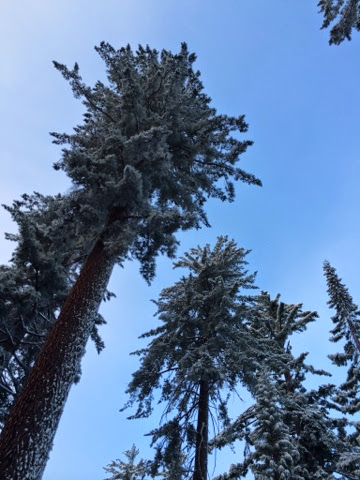 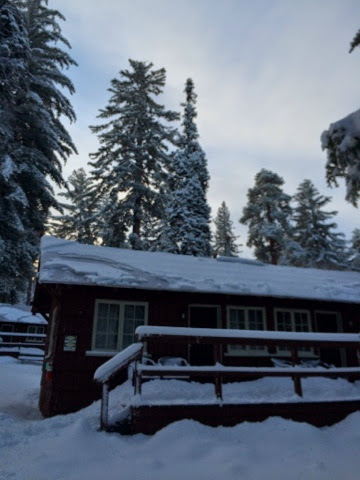 8 inches.  Only the 3rd snow that season at that low elevation.  Luckily the plows were out in full force but it took my husband about a half hour to get our car out of the parking lot due to crappy minivan traction.

Once we were on our way and realized that the switchback mountain roads were not icy and treacherous we enjoyed the view. 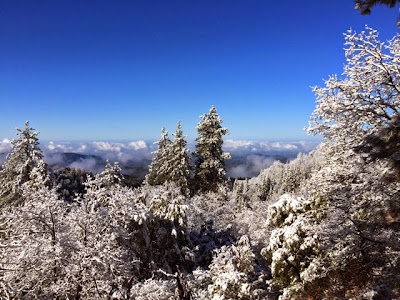 The kids thought it was cool to see the snow line as we got lower down. 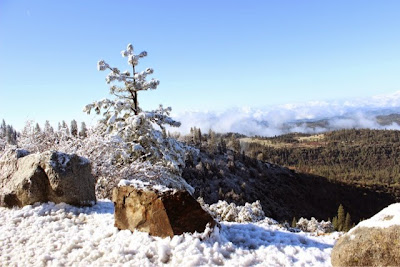 We had about a four hour drive to sunny Monterey, arriving in the early afternoon.
at 8:00 AM