Yesterday was Little Reader's actual birthday. We don't do anything special in the morning as my husband leaves for work before the rest of us get up. Although Little Man was constantly giving her hugs and saying Happy Birthday :)

Little Man "helped" me wrap all her presents while she was at school. My husband got home early so we were able to have her open all her presents before dinner (lots of Lego friends stuff, American Girl stuff, some books and games). 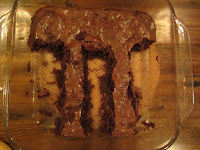 Dinner at her request was hamburgers and mashed potato casserole and brownies for dessert. Since it also happened to be Pi Day, she asked me to cut them into a Pi shape.

Once we've had a chance to go through her spring/summer clothes and see what fits, I'll probably take her shopping for some new clothes. I used to buy her stuff for her birthday but as she gets older it's harder. She's outgrown Carter's and Oshkosh and I'm not ready for her to be wearing stuff from Justice and some of the other places her friends shop.

She had really wanted a pair of silver Uggs but I refused to pay $140 for a pair of kids shoes. Even I don't have a pair of shoes that cost that much. I know she was a little disappointed about not getting them as so many of her friends have them, but I told her when we go shopping we'll find something else for her, and next fall maybe she can get some Fuggs.

Email ThisBlogThis!Share to TwitterShare to FacebookShare to Pinterest
Labels: birthdays