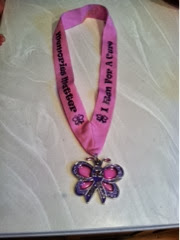 This morning I ran my first virtual race.  I had signed up for one so that I could get a medal for my half marathon, as they weren't originally planning on giving out medals.  So I found a race with a cool medal and for a charity I care about - Alzheimer's - and signed up.

Women Rock ended up letting people exchange their necklaces for medals which I did.  My medal for the virtual arrived yesterday and I felt like I had to earn it since I'd already gotten one for the half.  So this morning I set out for a 10k (my longest run since the half).  I started off slow but pretty soon realized I was on track for a PB.  I ended up finishing in 58:49.  My last 10k (an actual race I finished in 1:00:50.

I went home put on my medal and stretched out.  I kept it on when I went to pick up my son.  I had put a jacket on over so no one knew it was there but me, but it still felt good, knowing what I had accomplished. 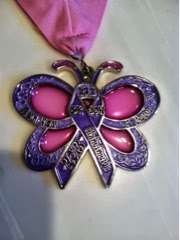 There are tons of virtual runs available at varying distances.  I find most of them on Facebook and there are races for everyone.  Tons of different charities and themes.  A lot of theme are a bit too commercial for my tastes - Disney characters, Despicable Me, that kind of stuff.  I have no problem with getting a Disney medal if I run a Disney race, but for a virtual I like the ones that are more unique or have to do with the cause or season.  Either way there are definitely enough options to keep you motivated for a low cost.