Why I Love/Hate Rainbow Loom

Like many grade school kids my daughter have become obsessed with Rainbow Loom bracelets.  They made some at their recent Indian Princess campout and came home begging for looms of their own.

I like them because they let them be creative (unlike the silly bands of a few years ago), and are relatively inexpensive. 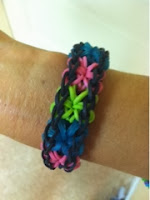 Why I hate them is the drama they have created in my daughters' classrooms.  About 2 weeks ago Little Reader made a starburst bracelet (like the one on the right) for her friend.  The friend left it on her desk at school and the boy who sits next to her took it.  They asked for it back and he has refused (although admits that he has it). His response was, "What's the big deal, it's just a stupid rainbow loom?"  True.  It didn't cost much for the supplies and she makes them pretty quickly, but it's the principle of the thing.  If he wanted one, he could have asked and she probably would have gladly made him one.  But I think he likes the attention.  He probably has a crush on her or her friend and likes that he has now created a daily conversation - 4th grade boys aren't very good at flirting.

She doesn't want to be a tattle but she wants it back.  My husband told her to tell the boy that if he doesn't give back the bracelet that he stole she's going to tell the teacher. She did that yesterday.  Sure enough he gave it back today.

Then last night when we were practicing with her how to have the conversation with the teacher, Little Hugger told us that a boy in her class had taken one of hers (when she left it on her bookshelf).  In this case we are friends with the parents so if he doesn't give it back I'll talk to them.  No need to involve the teacher.

I told my daughters after we get these back to not take them off at school and if someone admires theirs, offer to make them one.  Hopefully it'll work.