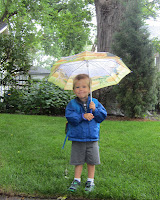 Little Man started preschool yesterday.  He was extremely excited, he picked out his clothes the night before (including the extra set of "just in case" stuff).  He listened intently as Little Hugger told him what she remembered about the school, including how show and tell works.  She even had him do a practice. One with a prop and one where he pretended he forgot to bring something and then just told something about what he had done over the weekend.

Unfortunately the actually morning was rainy so we weren't able to get a lot of outdoor pictures, and his umbrella is covering his face in most of the ones I did manage to get.

We all walked him down to his classroom, and met his teacher.  She's new to the school (although I had found her on Facebook once the classroom assignments came out).  Based on her age, I'm assuming she's getting back into teaching now that her own kids are older.  She was very smiley and seemed nice and had big floor size coloring books for each kid to color in until everyone arrived.  We gave Little Man a quick hug and kiss goodbye and left.

To take advantage of our girls only time, we went to Michaels to get some supplies for upcoming craft projects, and then I surprised them by taking them for mani/pedis. They both got flowers and jewels on their thumb nails which they loved.

We went back to pick up Little Man, and his sisters started firing questions at him.  It's always tough getting real info out of kids this age, but we did find out that most of the kids were nice but there were a couple of mean boys (who hit one of the other kids - but the teacher scolded them, so it was dealt with).  He doesn't know anyone's name yet, but that usually takes a while - especially at this school as it also functions as a day care so kids can share a teacher but be on very different schedules. They played in the gym as it was raining outside.  They did a butterfly craft to hang in their classroom (aka the Fluttering Butterflies).  They each got a gummy bear as a reward for cleaning up quickly.  The snack was Cheerios which he said he didn't eat because he wasn't hungry, but I had a feeling was more because he has negative memories of gagging on Cheerios.

For lunch he had his usual peanut butter sandwich, but since I want him to get over his fear of Cheerios (and other small chewables) I made him try one before his regular snack of graham crackers.  I told him that from now on he should try at least one of whatever is served at snack time.  He agreed.  It's ok not to be hungry and I'm not forcing the kid to eat, but the more things he tries the more he'll learn to like and hopefully we'll be able to drop the feeding therapy.

He did make another big kid declaration after school today.  "I'm not a toddler anymore, I'm a preschooler.  Preschoolers don't eat yobaby".  Woohoo!!  I have nothing against Yobaby.  It's obviously a great source of protein and calcium, but the more of the old "baby" foods that he drops and replaces with other things, the quicker I think he'll progress.  His sisters mostly eat Yoplait and Trader Joes yogurt so the consistency is a little different.  So far he's refused to try any of those, but I know one day he'll just decide he misses yogurt and try one.

He's very excited to go back again, and I'm sure will have even more fun as he makes some real friends and they get into a good routine at school.