Yesterday was Little Hugger's birthday. It started out a great day - sun was shining it was warm out, she had a good day at school. After school, things got a little more interesting.

Little Reader had dance class so I took Little Hugger and Little Man to the playground. We hadn't been there long before I heard Little Hugger screaming/crying and running at me with her hand at her mouth and blood on her hand. Between sobs, she told me she had knocked a tooth out, I took a quick look and figured she was ok - top tooth, still baby teeth - and took her to the bathroom. We cleaned her up, got an ice pack from the park district and once she had calmed down I looked a little harder. Front right tooth gone, left very wiggly.

I called the dentist but she was closed. Since these are baby teeth, I decided not an emergency and I'll call DDS tomorrow when she opens her office and let her decide if I should bring her in for a check -professional courtesy :). My husband has been called away from enough family things for "emergencies" that weren't, Dr Mom, now also a DDS, decided this can wait. Besides within a few minutes and finding the knocked out tooth on the offending piece of playground equipment we were all joking about that at least this time she had something to show the tooth fairy, unlike her first three lost teeth which she swallowed.

After Little Reader's dance class I drove her to soccer practice and then back to the dance building to get Little Hugger changed for her dance recital pictures. Opened her bag and realized I only had the belt. In my infinite wisdom the day before I decided to hang up her costume so it wouldn't be wrinkled. So where was it now? Hanging nicely in her closet. Luckily we had enough time to zoom home, pick up the costume, have her change in the car, and then be back in time for pictures.

So what's the third drama? We had our basement carpet cleaned today and while the guy was down in our basement he told me he noticed one of our goldfish was lying down on the bottom of the tank. I went down and peeked later, and sure enough, one had died. No real love lost here. Still since we just had the carpets cleaned I didn't want to spend too much time in the basement so went back upstairs. Later in the afternoon I took another peek, and the fish was gone. Not sure if the healthy fish ate the dead one - didn't realize goldfish were cannibals - but I'm not looking forward to cleaning the tank tomorrow.

Still, despite the drama, it was a good day. My birthday girl had a good day (despite the tooth) ending with her favorite meal - Mac & cheese and my chocolate chip cookies - presents, and after writing a note to the tooth fairy she went to bed with a smile on her face. 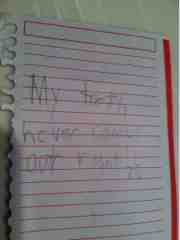 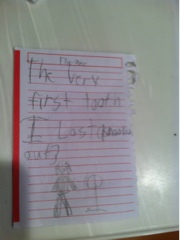