I didn't get a chance to write much while my in-laws were in town as I thought it would be rude to ignore them to blog, so here's the wrapup of their visit.

Thursday my husband took the day off to hang out with his parents.

I took the kids to camp and had a good run and reached my first mini goal - 3 miles in under 30 minutes. I know to a serious runner that's a horrible time, but it's been a while since I ran regularly so I'm happy. Next goal actually run the full three miles (right now I alternate running a mile and then walk about .15-.25 mile).

Little Man's feeding therapist came and she was really excited when we told her of his progress this week. She had him work on eating a sandwich - this time turkey, Havarti and lettuce on white bread. It took a while, but he did well with it.

After lunch my husband took all the kids to the driving range. His parents went to watch so I had a quiet house to myself for a couple of hours to read. It was great.

That night we went to see Poison and Def Leppard. We had a quick dinner at Chilis beforehand. We only caught the last two songs by Lita Ford but it was, "Kiss Me Deadly" and "Close Your Eyes" so that worked out well. 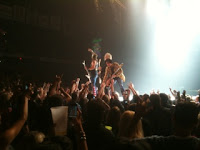 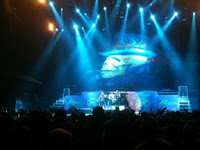 Poison was next and they were fun. Bret Michaels did make a couple of shameless plugs for the Apprentice, but at least he didn't try to promote his new line of pet toys at Pet Smart ;)

I had realized earlier that day that the reason for the tour was the 25th anniversary of the release of Hysteria. Wow. I'm not old, just older ;) 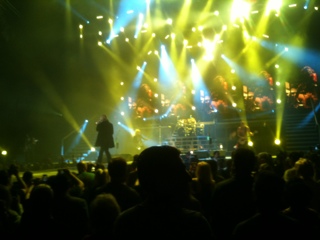 Def Leppard played a great set. There were a couple of songs I didn't know but they played everything I wanted to hear.  My husband took a few pictures at the show, as we had pretty good floor seats.  I've given up watching concerts from behind a camera lens and prefer to watch the show.


Friday we went to a playground for about an hour and a half and then that evening we went out to dinner with my inlaws. We went to Cafe Touché in Edison Park and then went to Curragh after for a couple of beers. 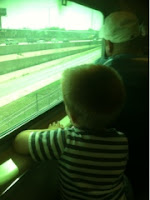 Saturday was our big outing. Little Man had been asking me for a long time when we could take a train downtown. We finally did. We took the train to Northwestern Station, Little Man thought it was very cool to see all the trains lined up when we arrived at the station. We took the water taxi from the Loop to Navy Pier. It took us a while to find the dock even though it's basically at the base of the Sears Tower. It's a pricey trip $8 per adult and $5 per kid, 3 and under are free. But it's about a 15 minute ride and a nice view of the city. The kids thought it was really cool.

We had a quick lunch at the food court and then took the kids on the ferris wheel. Little Hugger (who used to be our daredevil) is getting a little more nervous. It was her first ferris wheel ride and it is a big one. We took pictures of the kids but she got a little nervous when we had them shift around within our little carriage.  After that my husband took Little Reader on the wave swinger while I took the other two on the carousel.

After that we had to head back. Another $42 water taxi ride, back to the station and on the train. This time my father in law asked the captain if Little Man could blow the horn. Once we were out in a good spot on the water, he picked him up and let him. It was hard for him to push the button,so the captain helped him. He sat back down with a big smile on his face. When we got off, the captain asked his "first mate" for a high five. He gladly did and said thank you (as I had told him he should).

My husband and daughters had an Indian Princess pool party to go to when we got back and the rest of us just stayed home. It was supposed to be from 3 to 6, they got home at 9. Tired but they had had fun.

Overall a pretty expensive couple of days but fun.  Sunday we took it easy, Monday I treated everyone to Brave.  It was Little Man's first movie.  I luckily had a bunch of free movie/drink/popcorn vouchers so only had to pay for one ticket and one candy.

Overall it was a good movie, although I hadn't realized that it was rated PG.  My daughters and the rest of us enjoyed it but Little Man got a little scared.  I won't review the movie beyond saying that for really little kids there is a quick scene with a witch and a fairly long bearfight that scared Little Man.  We managed to miss most of it as he conveniently had to go to the bathroom at the beginning of it, and we returned at the conclusion.  After the movie I asked my daughters if they had gotten at all scared and they both answered that while they did get a little scared they kept telling themselves that Disney movies always have happy endings. :)  There wasn't quite as much comic relief as recent Disney movies, although Merida has some mischievous little brothers.

It had a good message - just because you hear what someone is saying, doesn't mean you're really listening.  Something that we've discussed a bit since we left, and I admit I need to work harder on.

Tuesday morning they left and I've slowly been getting back to our regular routine.  Overall it was a good visit and we took advantage of having extra adults in the house (free babysitting the night of the concert), I was able to go running without having to plan far in advance, etc.  The kids enjoyed having more people to play with, and are looking forward to them returning for the holidays.