We've had hardly any snow this year and the past few days have gotten up to the 50s, so today after lunch and a couple of errands with my Mom, I made the kids go outside. We ended up spending about 2 hours outside riding bikes, scooters and Big Wheels and took a walk around the block. By the end the kids had all taken off their jackets and my little guy was just in a Tshirt and pants.

My oldest daughter is really getting the hang of riding a two wheeler and was bummed when the chain came off the smaller bike and I couldn't get it back on.

She became very determined that she was going to master the bigger bike, which is actually the right size for her since she can only touch the ground with her toes, but it makes her nervous as she's still learning. After a few tries she got it and went up and down the block quite a few times. Typical bad luck on the last time I figured she was doing so well I would just sit down and look through the mail but still be able watch her instead of walking next to her. Then I looked up and saw a neighbor pushing her bike and walking her back.

Turns out when she went by their house their dog (some little drop kick dog) jumped up and nipped her. He apologized and I didn't see any holes or blood on her pants so I didn't make much fuss and took her home.

Turns out there was a little hole and some blood but looks more like a scratch than a bite. I cleaned it up with some hydrogen peroxide and gave her a Lion King bandaid wiped her tears and she ran off to play with her siblings.

All is well now. Tomorrow is supposed to be a little cooler but not much which is great as it's the kick off for Girl Scout cookie sales. Last year we had to bundle up, this year we'll be able to go door to door for a while so hitting her new goal of 75 boxes should be no problem. 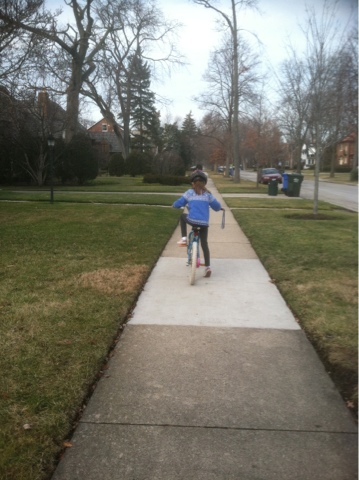