Legos are just for boys?

A few days ago I read a post by someone about girl vs boy toys and why does there need to be a difference? I can't remember who wrote it or where I found it, but the author commented on the Lego aisle at most toy stores and how there were lots of sets that would be considered "boyish" - Cars, Pirates, vehicles, etc and the girls are stuck with basic sets that included pink bricks but didn't have a theme. My oldest daughter wished for (and got) one of the pirate sets for Christmas last year and loved it.

My younger daughter is more interested in things that are traditionally girlie and wishes they would bring back the Belleville Legos. I just got the new catalog and there are some more "Friends" sets in there this time around. I'll probably get her the Heartlake Vet or Tree House for her birthday. Admittedly some of the other sets are a little too girlie for my taste but at least there is an Invention Workshop which would have been perfect for my oldest last year (she had a science birthday party) They also have a dinosaur series that I bet my oldest would love, it's never too early to buy the birthday presents, especially since I have a coupon that expires at the end of the month.

The other day she was playing with duplos with her younger brother. When it was time for his nap, he asked her to build him a beach. She said she would work on it while he was napping and he could play with it when he woke up.  I put him down for a nap and a little while later she brought me this. 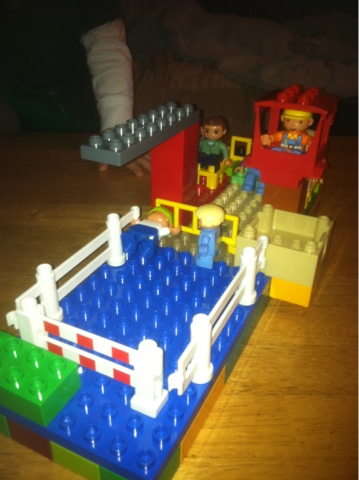 The details that she came up with crack me up.  Just to explain a little bit.  The blue is obviously the water.  The fences are to mark off the areas where kids are allowed to swim.  The red and white gate marks the deep area so kids can't go past that.  She is the little girl standing in the shallow end and the little boy holding on to one of the gates is her little brother who is practicing kicking as he wants to learn to swim.  Above him is a diving board. Bob the Builder is sitting in the lifeguard tower and he has his tools with him as sometimes the diving board breaks. In front of Bob is a small area for babies to play in the sand (she had a name for it, I don't remember).  Behind Bob on the beach are my husband and I sitting in beach chairs. 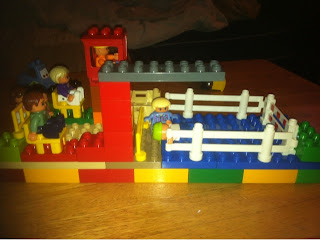 I think it's pretty cool and they've been playing with it for a couple of days now.
The grade school has a Lego Club and both my daughters are in it.  They meet once a month after school and the leader gives them a theme and they build stuff and at the end show their creations to the other kids.  I dropped them off the other day and bumped into a neighbor and his father on the way home.  The neighbor asked where my kids were and I told them that I had just dropped them at Lego Club.  He then introduced me to his Dad saying my two daughters go to the same school as his son.  The father then questioned why my daughters were at Lego Club.  "Is that bisexual?" he asked.  Ok, I know he meant unisex, so I didn't correct him, except to respond, "Absolutely not, all my kids love Legos". He has three grandchildren, one grandson plays with Legos all day, his sister has never been interested so he assumed Legos were a boy thing. I said I always played with Legos as a kid too, but as we were already at my house at this point, I didn't tell him that one of the Lego bins we have is one that I bought for myself long before I had kids when the Lego stores first opened in Chicago.  I would come home from work and build things. So not only are they for girls and boys there is no age limit :)
at 2:55 PM